When I think of the word "ginger" I think of my favorite ginger Amy Pond from Doctor Who! She's my favorite companion from the show, so I thought a whole post Amy Pond-themed worthy! Amy has her own special blend sold by Adagio Teas you can check out here!

1.) of or relating to a lake.
2.) living or growing in lakes, as various organisms.
3.) formed at the bottom or along the shore of lakes, as geological strata.

The Song:
"Little Amy"
from the Doctor Who Season 5 soundtrack
by Murray Gold

I didn't care too much about the Doctor Who soundtrack until season five. As soon as I watched it I was hooked. I especially love the soundtracks of the Eleventh Doctor. His have this fairy tale quality that the other seasons do not. It brings me back to my childhood. He tells Amelia Pond when she's a child that her name sounds like someone in a fairy tale and I love how Murray Gold took that into account in her theme. Little Amy's theme is soft with tinkling, female vocals, gentle strings, and a music box with a slight sinister bit alluding to the crack in her bedroom wall. It definitely has a fairy tale quality and it's perfect for a fantasy. 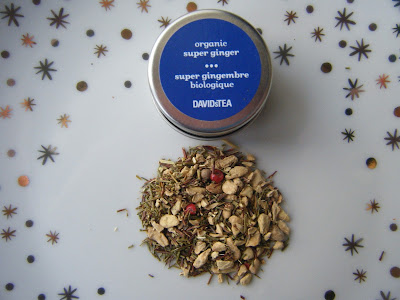 The idea came at about 2 in the morning one chilly night. David had a cold. He’d been drinking cup after cup of ginger tea, but there was a problem. His ginger tea had a ton of caffeine. His throat felt great, but he couldn’t get any sleep. Something had to be done. So he decided to create an herbal ginger tea – the spiciest, most comforting tisane he could imagine, with lots of ginger, peppercorns and green rooibos. And, most importantly, zero caffeine. The result? A tea so soothing…you might even say it has superpowers. (MK Kosher).

The Tea: At first smell this tea has an overpowering ginger smell with a hint of pepper with no trace of the rooibos or stevia. However, I've noticed after trying nine DavidsTeas that often I don't really like the smell of the teas, but I like the taste of the teas which usually isn't the case with most other teas I've tried since the smell is usually what you're going to taste.

The tea brews a foggy yellow. It's very gingery and very spicy as in burn your mouth spicy from the white pepper, black pepper, and pink peppercorns with a faint ending of sweet stevia and no trace of the rooibos. The tea leaves a warm spicy flavor with every sip. I can see this as a life saver if you're sick. If I get sick and try this I'll let you know.

This tea also has similarities to the feisty spicy personality of Amy Pond. Of course it isn't as fitting as her specific blend by Adagio Teas, but this does remind me of her both in name and flavor.

Serving Recommendations: I steeped this tea for five minutes at 204 F and added sugar.

How much is it and where can you get it? You can buy this tea at a DAVIDsTEA store or on their website. You can get just Super Ginger for $7.98-$79.80, depending on how much you get. The smallest amount is 2 oz. and the largest amount is 20 oz. You can also get Fabulous Fennel along with five other teas in the Super Spice set (which is what I did) for only $14.00.

So how good is it? This tea didn't wow me, but it certainly has an unusual flavor and I could see it working wonderfully for medicinal needs. Three stars!