Lydia, who’s never broken any rules, except falling in love with the wrong boy. Lydia, who’s been Piper’s best friend since they were children. Lydia, who never even said good-bye.

Convinced the police are looking in all the wrong places, eighteen-year-old Piper Sail begins her own investigation in an attempt to solve the mystery of Lydia’s disappearance. With the reluctant help of a handsome young detective, Piper goes searching for answers in the dark underbelly of 1924 Chicago, determined to find Lydia at any cost.

When Piper discovers those answers might stem from the corruption strangling the city—and quite possibly lead back to the doors of her affluent neighborhood—she must decide how deep she’s willing to dig, how much she should reveal, and if she’s willing to risk her life of privilege for the sake of the truth.

This has to be my favorite of Stephanie Morrill's books. I've read Me, Just Different and The Revised Life of Ellie Sweet and I'm just not a huge fan of contemporary. YA Historical Mystery, however, is more my cup of tea. When I found out Stephanie was writing one, I knew I had to read it! I got to be on her launch team and get a copy!

The Plot: The plot was a fun whodunnit with twists, revelations, and red herrings. I especially loved the first half, but when something happened to a certain character the ticking time bomb was lost and I feel like the book lost a good deal of its initial tension. I still enjoyed the rest of the story, but not as much as the first part.

The Characters: I liked Piper a lot. She was a girl with a modern attitude in a world where women are still thought of as delicate fragile creatures. She's loyal and awkward around kids (which is nice to see since most girls I know fawn over kids and I'm the same way as Piper).

Lydia especially interested me, especially since I know Stephanie's background. Lydia is the sweet eldest daughter of a prominent doctor, but she has epilepsy. As Stephanie has spoken about on her blog, her son Connor has epilepsy, so Lydia's epileptic spells were eerily accurate. I couldn't help feeling a deep empathy for Stephanie knowing she has gone through many of the motions Piper did about witnessing her friend suffer a seizure. This was a personal touch that I know Stephanie must have had a hard time writing, but I think it was a good tribute to her son.

I enjoyed the other characters as well including Mariano and Walter, but Lydia and Piper stood out the most to me.

The Setting: Piper's world is in the Midwest during the 1920's aka Prohibition era. This created many interesting elements in the cultural environment as well as the vintage phones and vehicles.

The Theme: Guilt plays a big part in this story. Piper deals a lot with regret about Lydia's disappearance and even believes she deserves to be punished for it.

Content Cautions: There's mention of affairs and some illegal drinking. Piper is scraped up and knocked unconscious a few times. One girl is shot and there's some blood. Lydia's seizures a bit frightening.

1.) The Protagonist Tells Someone She's About to do Something Dangerous - You've seen the protagonist go off and do something stupid and not tell anyone then the secondary characters have to scramble to find her. It's happened a million times! Why won't people learned?! That's why I'm so happy Piper was smart enough to called Mariano and tell him where she was in case anything bad happened to her.

How this can be applied to writing: I wish more protagonists would do this. Nuff said.

2.) Waking Up From a Nightmare in the Morning - Piper has a nightmare and wakes up in the day time. I can only recall two nightmares I've had at night. Most I've had in the morning, so it was really cool to have someone also have them in the morning.

How this can be applied to writing: Have you considered having your characters have nightmares in the day?

Conclusion: I really enjoyed this book and if there's a sequel, I'll totally read it! 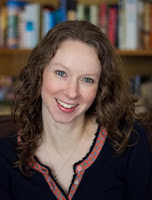 About the Author:
Stephanie Morrill is the author of several young adult novels, including the 1920's mystery, The Lost Girl of Astor Street (February 2017, Blink/HarperCollins). Despite loving cloche hats and drop-waist dresses, Stephanie would have been a terrible flapper because she can’t do the Charleston and looks awful with bobbed hair. She and her near-constant ponytail live in Kansas City with her husband and three kids.