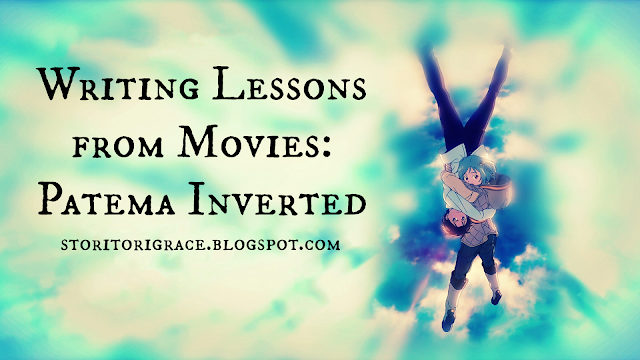 I doubt most of you have heard of this film, but IF YOU GET THE CHANCE WATCH IT! I was browsing on my Amazon Prime one night and I saw this film suggested so I decided to click on it. Mind. Blown. How have I not heard of this?! It apparently came out in 2014. The film is about a world where there are two polarities of gravity and people and objects are affected by either gravity. Thus if someone comes from the other side of the planet if they're not holding onto something they'll "fall into the sky." DOESN'T THAT SOUND SO COOL?!

This is one of the best anime movies I've seen (and I've seen quite a few at this point by Studio Ghibli and other studios.). It not only has an amazing concept, but it has great writing as well, including endearing characters, a mysterious plot, and a formidable villain. As soon as I finished the movie, I knew I needed to write a whole post about it. Let's go!

1.) Artfully Explaining Mind Blowing Concepts - In a geeky flurry, I've explained this movie to several people in a very summarized fashion. However, introducing such an unusual concept is very difficult to do in a story without completely info dumping. Also, there is no dumb puppet character who comes into this world, so you don't have that excuse to explain. These characters already know fully well about this opposite gravity. So how did the film explain this without a horrible stream of contrived dialogue?

They used clues that you had to put together. Whether it be snippets of dialogue or just you witnessing things drawn to different poles. Also they did the school sneak (which I've also used in my books) to explain a bit about the opposing gravity, since the teachers speak about it in class--and also have a freaky painting on the wall of people sucked into the sky.

How this can be applied to writing: When we writers come up with an amazing idea, we want our readers to know every single detail about it so they know exactly how amazing it is. This gives us the tendency to info dump. However we must RUE, Resist the Urge to Explain. Plant clues for your readers and let them figure it out. They're not stupid.

2.) Sharing Secrets Bond Characters - Patema and Age (pronounced Ah-gay) are thrust together by accident and since they are the main characters they need to bond. Age reveals to Patema his late father's love for the stars, something he's never told anyone because looking at the sky is considered blasphemous in his culture. Being able to divulge this secret without judgment begins to bond him to Patema.

How this can be applied to writing: What secrets can your characters divulge to each other to bond? It doesn't always have to be a lengthy backstory, but sometimes a quirk or a dream can be all it takes for characters to be endeared to one another.

3.) Villain Power Plays - Izamura is the villain of the story, he's a creeper and hold a high position in the government. He enjoys being in charge and he believes in the long held principles of the Inverts (people affected by the other polarity of gravity) as blasphemous. One of the things that makes him intimidating are his power plays.

For example, when he comes to speak to Age about Patema (who is an Invert hence the title), he has his right hand man dump Age out of his chair and hold Age to the ground, while he sits in the chair. Later on, he also dangles Patema over the sky (yes, it makes my head spin too), to frighten her into clinging to him. This may seem like he's just being a jerk, but it also reveals his need for superiority.

How this can be applied to writing: Do your villains make power plays? They can come in many forms and not all are violent like breaking someone's finger or something. Another example is from BBC Sherlock. Magnussen urinates in someone's house. This may just seem gross (and it is), but it's a power play. It's an animal-like gesture of marking a territory as his like Izamura taking the chair from Age is telling him that he's in charge. It seems primal, but power plays can be very intimidating and make your villain more formidable. 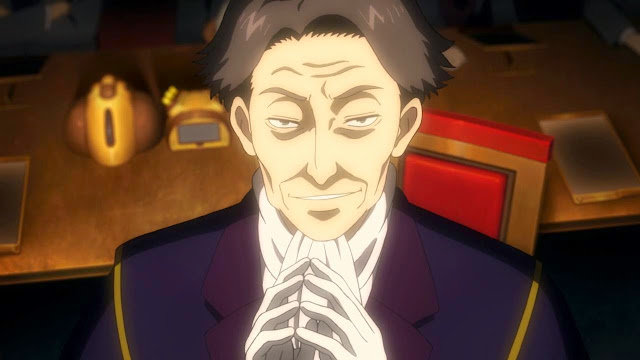 4.) Bringing Characters into Each Others' Worlds - The world in Patema Inverted is divided by the gravity. On one side, one person can walk normally while one from the opposite feels like they're falling and vice versa. Patema first goes to Age's half of the planet then later on Age goes to Patema's half. Each experience the wonders of each other's worlds and what it feels like to be falling up. This creates a special understanding between the two of them and also allows the viewers to explore both worlds in the shoes of each of the characters, so they can fully experience this amazing concept.

How this can be applied to writing: Do you have a book where characters are from different worlds? This doesn't have to literally mean different worlds, but it can be different lifestyles or different countries. Having the reader see each side first hand can be an immersive and bonding experience.

5.) Expecting A Character to Come Back But They Really are Dead - Near the beginning of the film we're introduced to Lagos who is a close from of Patema's and who is fascinated with the other half of the world. He disappeared mysteriously. I honestly thought he was going to pop again like most characters who mysteriously disappear in movies and such, but it turns out he died from torture by Izamura and has been dead for a long time. As the film goes you learn more about him through diaries and this felt more powerful than if he told Patema and Age himself, him dying for his dream meant more.

How this can be applied to writing: Have you ever considered having that character who disappeared years ago and is presumed dead to be actually dead? Having him or her be alive is an often used trope, but contemplate the impact of the person actually being dead. 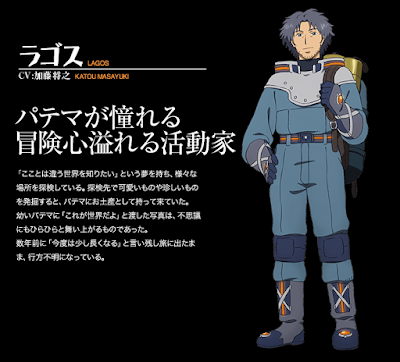 Conclusion - Patema Inverted is a fascinating film and I highly recommend it. Unfortunately Amazon Prime took it down, but if you come across it please give it a watch and tell me what you think!