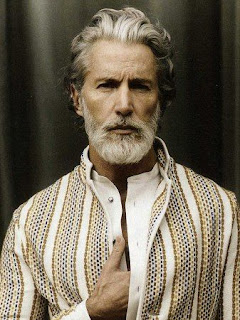 The first call for questions of the year is here! This one is with one of Starbloods' villains named Ioto. I'm currently in the editing process of Starbloods and any questions to help develop Ioto would be wonderful! Let me tell you a little bit about him.

Ioto is a 567 year old werewolf and one of the first werewolves ever created. He was at Mordraug's side when the first thirteen werewolves came into being from the power of the god Mwog.

Before he became a werewolf, he was a Starblood with the power of invisibility who was fascinating with healing and other magical arts. He studied with some of the greatest healers in the world, before tainting his starlight and becoming disgraced. After that he gave up his pursuit of knowledge and tried to have a simple life with a wife and family. However, that sort of life was never meant for him and he joined a criminal underworld then eventually left his family to help this group of bandits with their medicinal needs.

During his raids, he found Mordraug as a young boy in the rubble of a village. He took pity on him and raised him as a member of the bandit troupe. Years later, while in a severe snowstorm they encountered Mwog and he blessed them with abilities. Since then Ioto has found his true purpose, being able to discover as much knowledge as he wants without having the worry about death. He has concocted many spells and pushed the limits of werewolves. He has recorded all of his finding in his library worth of journals and he constantly keeps a journal with him.

Ioto isn't a talkative man, but when he does say something his words are never wasted. He is Mordraug's closest friend despite their differences in personalities. Ioto is also ambitious and when he sets his mind nothing will stop him. He refuses to fail and will make anyone who tries to make him fail pay.

Leave your questions in the comments or in the form if you'd wish to remain anonymous or if you're having trouble with the comments. Ioto will answer them on March 24th! Thank you!
Posted by Victoria Grace Howell at 1:00:00 PM