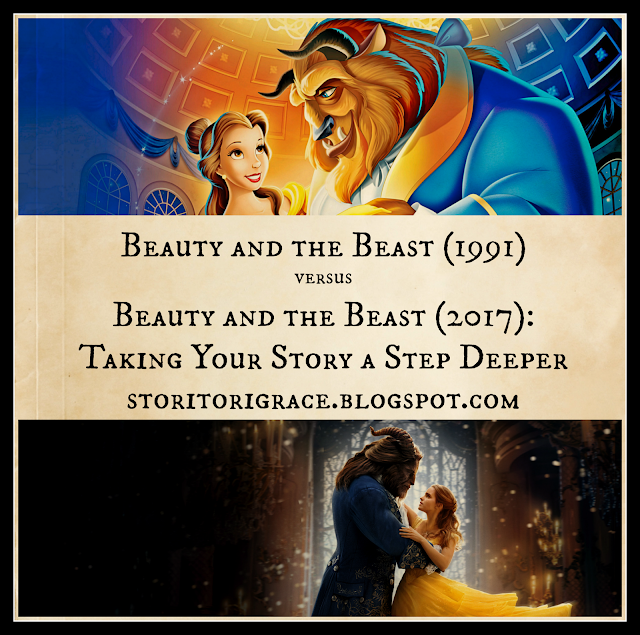 First of all, I'm a humongous fan of both movies. I'm not pitting these movies against each other, more like expanding my point about how I believe basically the 2017 Beauty and the Beast is Beauty and the Beast: Extended Edition. That's not a bad thing. As a long-term fan, I love it. I really enjoy seeing so many aspects of this classic story deepened.

Beauty and the Beast has been my favorite Disney princess movie fore a very long time. Not only do I really relate to Belle, but I'm in love with the soundtrack, I thought Gaston was a formidable villain, and ... the Beast ... I just love the Beast. ^ ^ I also thought that this was the most logical Disney princess love story, and if someone mentions Stockholm Syndrome I will hit you, because the princess actually had time to get to know her lover and vice versa. Well enough fangirling over it (though more of that will probably happen anyway) and let's get on to the meat of the post for the tale as old as time.

Going back to the Grimm Roots - I bet 90% of the people who've seen either or both of these movies has not read the original Brother's Grimm fairy tale. I'm a giant nerd so I have and the original story has quite a few differences than the Disney version. Did you know Belle was actually supposed to have two older sisters and her father was supposed to be a merchant and there was actually a magic ring involved? Disney only bases their stories on the original fairy tale and often that's a good thing because it makes for a happier ending, because in the original Little Mermaid story, Ariel doesn't get the guy.

1991: This version was loosely based on the Grimm's. It has a similar plot, but many of the details were changed and there's nothing wrong with that. It's what you do with adaptions. Disney took an old fairy tale and turned into a film that's been a classic in households for over twenty years. 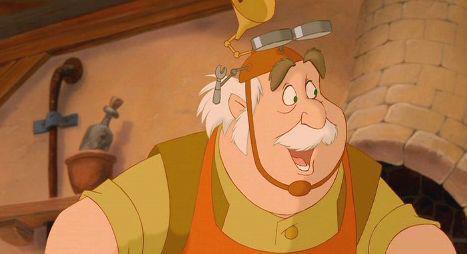 2017: In this version, there are a few more nods to the original story, like making Maurice more of a merchant and also having the reason that he angered the Beast being that he stole a rose.

How this applies to writing: If basing a story on another story, don't forget your source material. There are often little details in the original that can add a special magic to your version because often those details are what made the source material timeless.

Belle's Mother - Mother's seem to be absent in a lot of fairy tales and often without explanation. We just assume that there isn't a mother in this story and accept it.

1991: Belle lives with her father and there's no mention of her mother at all. We assume she probably died and as viewers accept that. 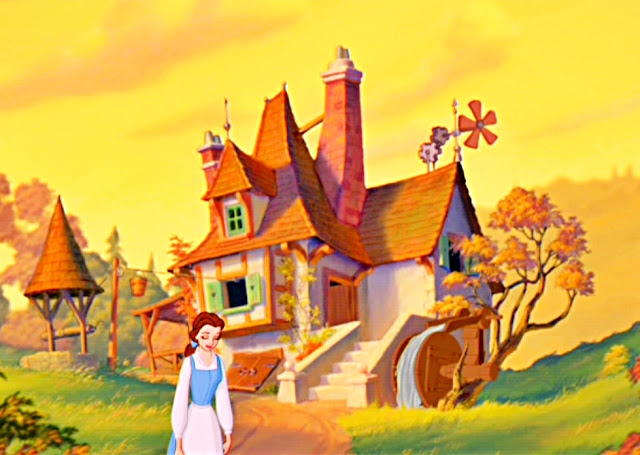 2017: In this version, a substantial subplot is dedicated to Belle's mother and this also fleshes out why Belle had to move to "this poor provincial town." This gave Belle and Maurice some good backstory that made me love their characters even more. This also broke the trope about Disney princesses having mothers gone without any explanation. Instead, we get a tragic backstory and a reason why Maurice felt like he could never tell Belle what happened to her mother.

How this applies to writing: Tropes are very commonly used in storytelling. It's why they're called tropes. The "chosen one" trope. The "love at first sight" trope. How can you take a trope and smooth it over or add something that will make it stand out as unique? 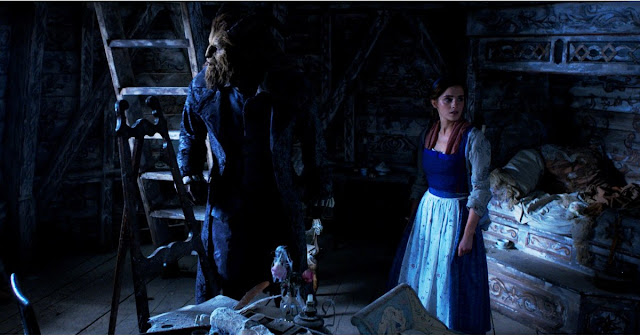 The Beast's Past - Often in stories, we're presented with a character who acts a certain way whether that be negative or positive, but we don't think about the "why." The "why" isn't always required, but when the "why" is presented then we can often grow more attached to that character than we did before.

1991: At the beginning of this story, we immediately get the Beast's backstory and how he was transformed into a hideous beast and his castle cursed, but we don't get anything about him farther back than that. We know nothing about his childhood, only that he grew up spoiled and selfish. 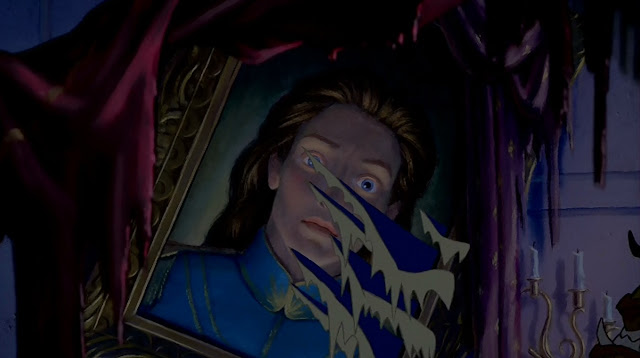 2017: In the song, "Days in the Sun" we get a look into the Beast's childhood then we get snippets through dialogue with the staff and with the Beast himself all accumulating into the story that after the Beast's mother died his father warped in son probably out of grief. The Beast was spoiled and selfish out of the negative influence of his father.

How this applies to writing: Backstory doesn't mean you have to do one big long flashback to portray to your readers why your character is the way he or she is. Just leaving little tidbits for your reader to put together can be enough to show your readers what they need to know. 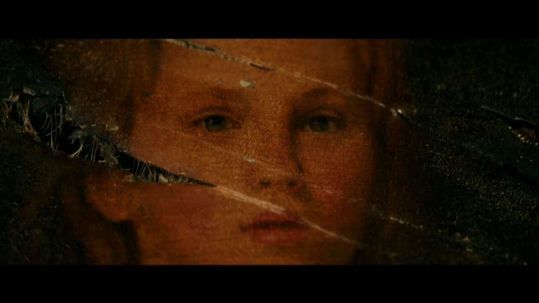 Fleshing Out Gaston - Villains nearly always come across as more meaningful if you just give them a bit of backstory even if it's small. Sometimes you don't need their life story, just a few choice statements that can show your readers that this guy means business and his goals make sense.

1991: Gaston outwardly states that he wants Belle because. "She's the most beautiful girl in town. She's the best and don't I deserve the best?" He's prideful, determined, rude, presumptuous, and sexist as all get out. He wants what he wants and Gaston will pursue what he wants like the game he hunts. Belle isn't a person to him, she's a prize. 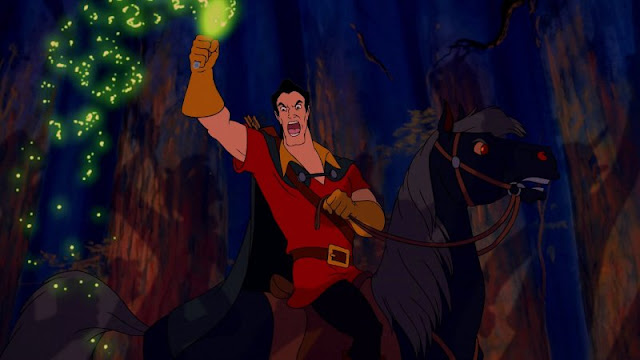 2017: This version of Gaston has all of the features of the old one, plus more. Many could could complain that Gaston's motivation could be weak because so many other girls fawn over him, so why doesn't he just accept one of those and leave Belle alone? As this Gaston states, "Why waste my time on rabbits?" One of the reasons why Gaston is pursuing Belle so fervently is because she's a challenge. She's difficult to obtain therefore he wants her more. Like Meg from Hercules said, "Men think that "no" means "yes" and "Get lost" means 'Take me I'm yours.'" There's a whole laundry list of issues about why that's wrong, but that's why Gaston is the villain right?

Furthermore, Gaston is also given the backstory that he was in the army, probably as a commander. This gave even more meaning to the mob scene when he riles up the crowd enough to make them storm the Beast's castle. This line was especially poignant:

Call it war, call it threatYou can bet they all will followFor in times like this, they'll do just as I say


This made Gaston an even more devious character as he knowingly manipulated these townsfolk with fear and charisma to do his bidding.

How this applies to writing: Are there any holes in your villain's motivation? What can you do to fill them in? 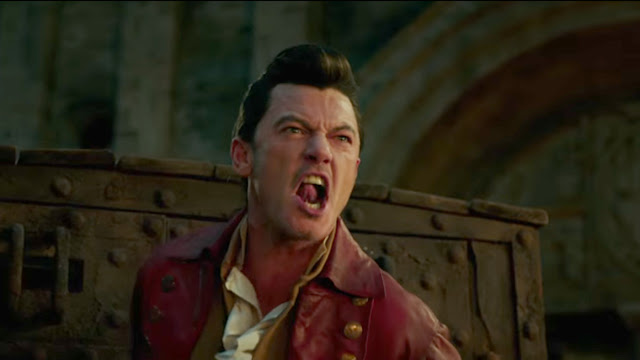 Adding Emotion to the Staff - Side characters need nearly as much tender loving character in development as protagonists to truly be memorable. These side characters are one of the most memorable Disney side kicks--especially to me. I actually had a Mrs. Potts tea set.

1991: Lumiere, Cogsworth, Mrs. Potts, and the rest of the gang seem pretty independent from the town with no familial ties, though you're so caught up in the story you don't really think about this. They also have an undying loyalty to their master, which some may wonder why they're taking this abuse. Regardless, they're still extremely lovable. I mean, who can't love Chip? 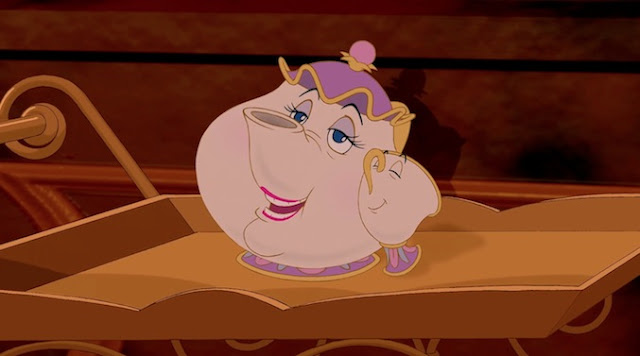 2017: I for one felt so much more emotionally attached to the staff by the end of this film, and I didn't even know that was possible since I already loved them from the previous one.

Firstly, the staff were given a stronger motivation to be loyal to the Beast. Not only was he their master, but they felt regret for not doing anything to stop his father from warping him, so in turn they feel like they're responsible for the curse as well.

Oh, I could singOf the pain these dark days bringThe spell we're underStill, it's the wonder of us I sing of tonight


Secondly, the staff were given ties to the village. The curse included that the village had all knowledge of them erased, which is really sad when you think about it and especially when you find out that Mrs. Potts has a living husband and Cogsworth has a wife. I was almost brought to tears when Mrs. Potts embraced her husband and Chip his papa.

Thirdly, the curse was made even more severe for them. In the 1991 version, they could never turn human again which is bad, but in the 2017 they not only will never become human but they will lose their animation forever, which means that they practically die and the Beast will be forever alone. I actually got choked up when it looked like they had failed to break the enchantment and all of the staff were losing their humanity. Mrs. Potts not being able to see her son one last time before losing her animation, and the Butler's last act being that he saved Chip really broke my heart.

How this applies to writing: How can you add more emotional connection to your side characters?

Conclusion - I could rant about these movies and how awesome they are for much longer, but I'll cut it off here. XD Overall, I love both of these films. They're inspiring and pull on one's heartstrings. They can teach us a lot about writing and they're remain in our hearts for years to come.