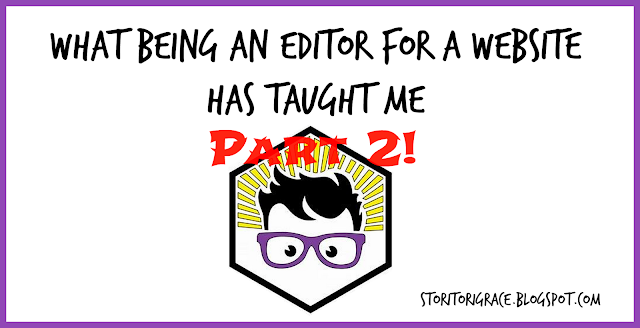 Last year, I wrote a post about what it's like being an editor (if you want my whole long backstory on how I became an editor in the first place check that out), and now it's my fifth most popular post on the blog. Since I've written that post, my duties as an editor have evolved to a degree, so I thought a sequel was in order. Here we go!

1.) Learning How to Hire People - In January, my editor-in-chief gave me and my other department editors clearance to start hiring writers on our own. Before that, the editor-in-chief did it, but it was quite an overwhelming job for her (no kidding), so it the responsibility was spread out across departments. Thus, I had to learn how to hire people and I knew like nothing on how to do that. I've been hired by a lot of places, but I've never been the one doing the hiring, so this was a big flip in perspectives.

First, I had to advertise that the position was available. Thus, I wrote what I wanted in a writer for my department and handed it off to the marketing department to get a flyer made. Then I spread that flyer across the interwebs and the marketing department did the same.  Soon, I got emails streaming in from many different applicants of all different ages and walks of life. Nearly every day for the next two weeks-ish I had a new application from somebody. It was a bit overwhelming, especially when several of the applicants didn't include all of the information I needed to fully evaluate out them--like the flyer clearly stated. For the love of Pete, people, follow the guidelines an editor gives you. It's not hard.

Then I had to pick who I wanted. Some people I knew immediately that I wanted them on my team and other ones I had to really debate between who I wanted to bring on. Then they had to sign a long bunch of paperwork that I had to send then I could finally bring them into the chat rooms. In the end, I believe I've picked a pretty fabulous team and they're doing very well so far.

2.) Sending Out Rejections - If you've been reading this blog for any amount of time, you'll know I've personally received a lot of rejections. I was a little nervous being on the flip side and having to send rejections to other people. I had a little sample form rejection that made it easier where it kindly let people down. Some of the people I didn't necessarily want to reject, but their writing just wasn't the quality I wanted. Then there was this one guy that was so arrogant, halfway through the email I was like,

By the end my conclusion came to:

3.) Keeping Up Relationships Individually - With these new writers and my team overall, I've made it a point to check up on everyone every week to see how the team is doing. This has been a lot of work, especially for introvert me, but I feel like doing it has strengthened my team as a whole since I have a relationship with each of my writers. I can pray for them when they have problems and they're more comfortable about sharing ideas with me.

4.) Becoming a Mentor - One thing I've come to learn is part of being a good editor is being a mentor for your writers. You don't want to constantly correct, correct, correct, you also need to make a point to make your writers feel appreciated and that their strengths are being valued. I came to this conclusion partly from my own experience with editors. I've worked with one website where the editor only corrects and never acknowledges my strengths as a writer and it really makes me feel kinda like crap. Then I've worked with another editor that critiques me, but I feel like she's pushing me to grow as a writer in a way that I feel valued. Whenever I've finished with a post I try to point out the good points and points that need to be worked on to each writer.

5.) More Work Can Be More Satisfying - One of the reasons I had to hire in the first place was my team was too small, but because of that I only had to edit something maybe every other week. Now that my team has grown to seven writers, I edit anywhere from two to five pieces a week and usually they come out on the weekends which is when I work. This can be a little overwhelming, but it's overall satisfying because I'm seeing lots of fresh content on the site every week. I feel like my department is really pulling its weight and I get that proud parent feeling.

Conclusion - I'm still loving being an editor. It grows me as a person and I feel like I'm helping other writers grow as well.

You may also like:
What Being an Editor for a Website has Taught Me
Extending Your Novel: How to Make the Story Longer Without Just Adding Fluff
How Sentence & Paragraph Structure Can Boost Your Book
Six Tips For Line Editing
Writing vs. Editing: The Different Mindsets