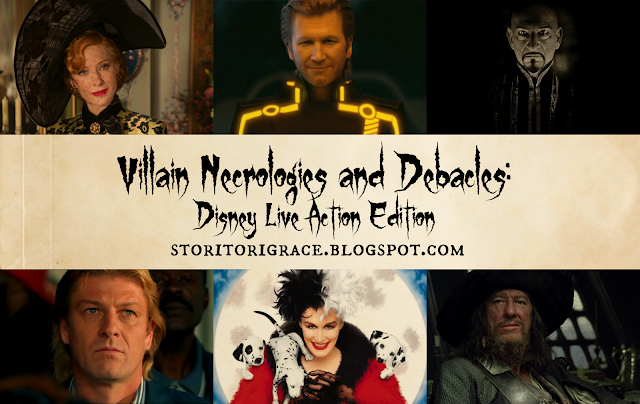 Villains meet their demises in so many different ways. For some this means death, for other this means an unfortunate incapacitating situation. Writers put a lot of thought into how their antagonist finally fails, but which way is best for your villain? That all depends on so many different circumstances, including audience and genre. This is what inspired my series "Villain Necrologies & Debacles." Over time, I'll be analyzing different animation studios, franchises, and more. These posts are meant to show you what sort of defeats have been done whether common or uncommon, perhaps inspire some villain defeats of your own, or you can just enjoy the morbid humor. Check out last month's Pixar Edition!

Not only does Disney have many animated villains, but it has many live action ones too that die in a little bit more grittier deaths. I'm taking villains from all of the live action Disney movies I've seen. (I've seen a lot apparently. Discovered that while making this list.) I'm not including Star Wars and Marvel villains because number one I already did a Marvel villain post (and a Star Wars post will come in the near future) and number two I still see Star Wars and Marvel as separate from Disney even though Disney owns them. I'm also not doing movies that came out before the 80's because then this post would be monstrous. Moving on. I'm really curious if you guys have seen a lot of these more obscure Disney live action films, so if you have give them a shout out in the comments. Without further ado, let's get to it!


Warning: Spoilers for all of the villains in those movies.

Arrested - Even in Disney live action getting caught by the law is a prime way to get rid of your villains. Ian Howe (National Treasure), Cruella (101 Dalmatians and 102 Dalmatians), Beauty Smith (White Fang), Lord Kelvin (Around the World in 80 Days), and Claw (Inspector Gadget) all befell this fate of probably 20+ years in prison.

Banished - After The Red Queen (Alice in Wonderland) did her dastardly deeds in Wonderland, the White Queen banished her. This is a pacifist but just approach, but always has the potential of the villain coming back. 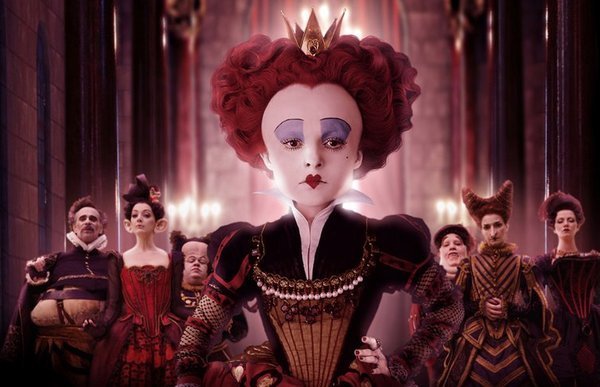 Fired - Agent Burke (Race to Witch Mountain) obviously broke a laundry list of FBI rules while pursuing Seth and Sara, so he got in big trouble with the higher-ups. Since his power was stripped away he's no longer a problem for our heroes. Basically, Burke was de-clawed.

Humiliated - For a very long time Lana (the Princess Diaries) was Mia's antagonist. She humiliated Mia in many ways and outwardly mocked her thus when Mia finally gets the courage, she smears her soft-serve all over Lana's crisp cheerleader outfit. The students around her mock her. Because of this embarrassment, Lana finally leaves Mia alone. This defeat is probably best kept to contemporary stories and can often result in the antagonist then coming back for vengeance.

Leaves - After Meredith Blake (The Parent Trap) was tormented by the twins and Long John Silver (Muppet Treasure Island) realized he was beaten by Jim Hawkins, these two decided to leave on their own, accepting their defeat instead of dealing with consequences. Therefore distance became the thing that kept these villains from further damaging the protagonists. Also Long John Silver is one of my favorite Disney live action villains. ^ ^ Tim Curry for the win. Moving on ........

Left Behind - This is another instance where distance is a defeat, but in this case the protagonists escape the antagonists. Cinderella leaves Duchess Tremaine (Cinderella) to marry Kit and Squanto leaves Sir George (Squanto: A Warrior's Tale) behind to return to the Americas. 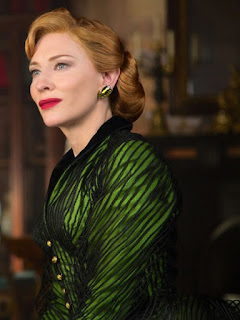 Realizes He Was an Idiot??? - Okay this one was really confusing for me. I really enjoyed the new Pete's Dragon, except for the antagonist Gavin. He couldn't make up his mind. Was he going to be a good guy or a bad guy? Why is he even capturing Elliot in the first place? He never got a real defeat. He sort of turned good ... sort of ...? The best thing I can think of calling his is realizing he was an idiot. Cause he was ... He went through a lot of trouble to capture a dragon he then had no idea what to do with. 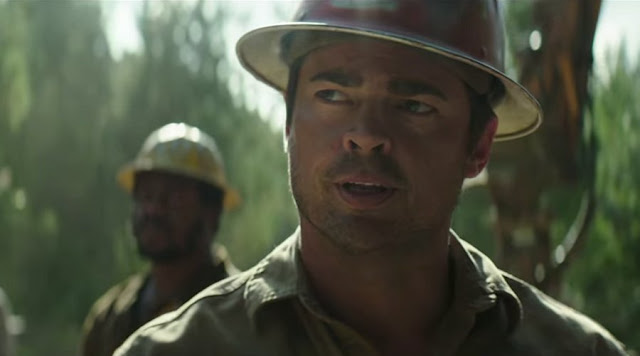 Absorbed into the Creator - Clu (Tron Legacy) isn't human, thus this immediately opens up a lot of creative deaths. Clu was made as a copy of Flynn, thus it was fitting that he death was to be absorbed back into Flynn, rejoining his creator. This has to be one of my favorite deaths because Flynn never meant for Clu to become this way, but Clu misunderstood his creator's purpose for him. He took what Flynn wanted it and twisted it with his own ideals. 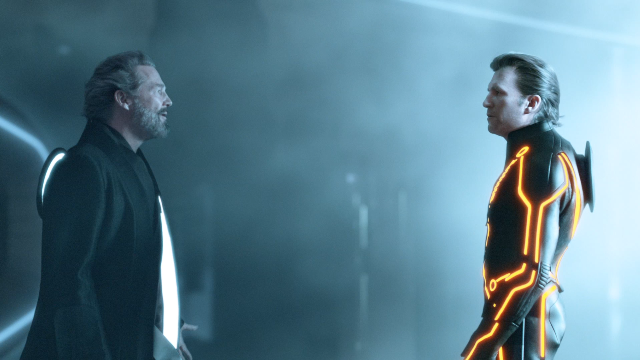 Cracked Skull - What a lot of people fail to consider is that in trying to knock someone out with a blunt object, you can crack their skull or cause other cranial damage. This is what happened with the Man in the Yellow Suit (Tuck Everlasting). This is what happened when Mother Tuck tried to stop this antagonist from hurting the protagonist. 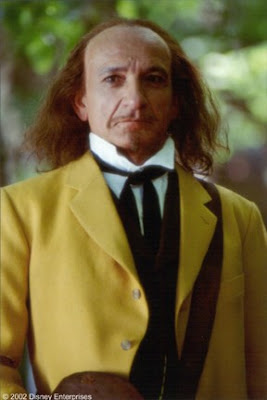 Crushed Skull - This has to be one of the more gruesome deaths. Sab Than (John Carter) had his skull crushed by the 9th Ray. 'Nuff said. 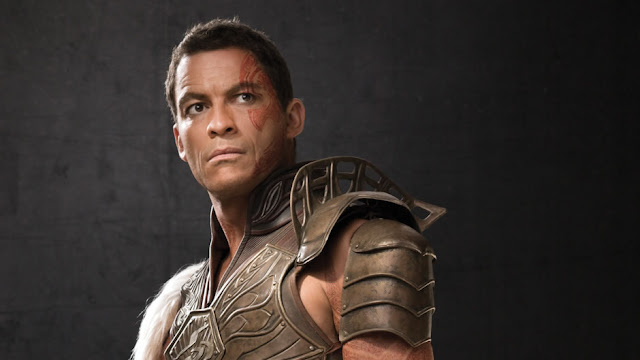 Buried Alive - This was an ironic death Stiles (Tall Tale) was buried alive in a cave in inside tunnels built for his own train. Never underestimate the power of ironic deaths. 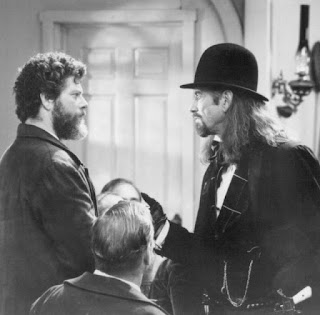 Burned Alive - In the animated version, Sher-Khan merely was scared away by fire. In the live action The Jungle Book, his fate was far was and I felt far more suitable for him as a villain. While chasing Mowgli up a dead tree, he walked out onto an unsteady branch, thus he plummeted into the burning forest below. Ain't comin' back from that. 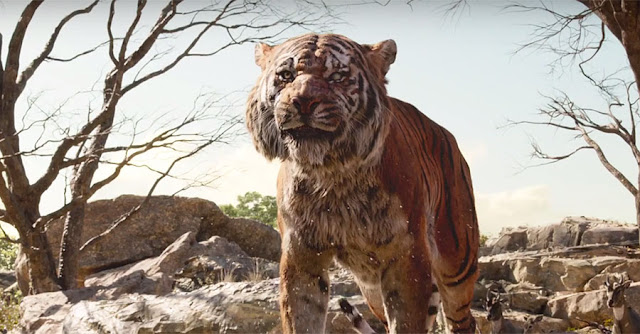 De-Resolution - In the world of Tron, de-resolution is basically deletion. Master Control Program (Tron) was deleted by Flynn in an act of sacrifice. 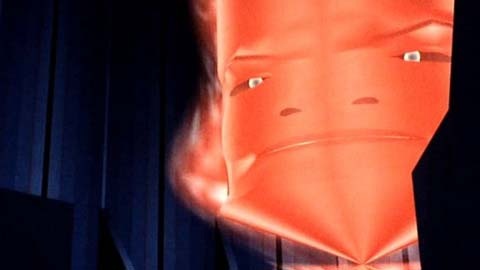 Drowned - Cardinal Richelieu (The Three Muskateers) and Mitch (National Treasure: Book of Secrets) both drowned. The Cardinal was knocked into a river and never came up and Mitch stayed behind in a room full of rising water. 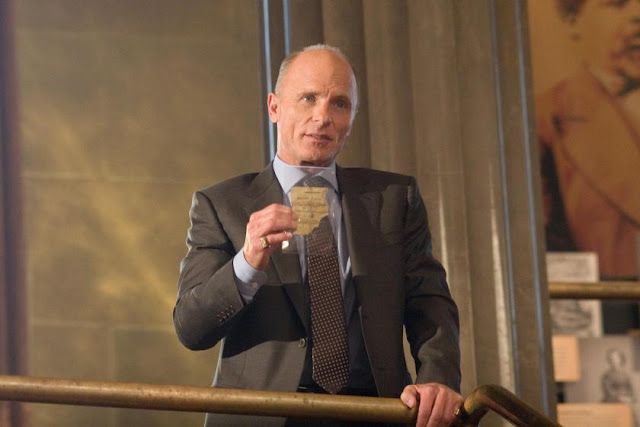 Drinking from the Wrong Enchanted Cup - In Pirates of the Caribbean: On Stranger Tides, for the Fountain of Youth to work someone's life must be taken for someone else to live forever. Blackbeard, aspiring to have long life, took the wrong cup and had his years taken from him. 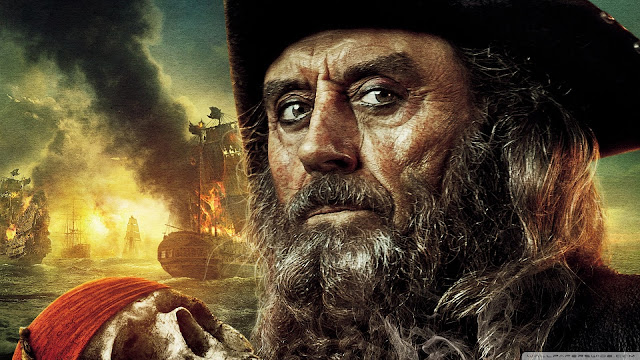 Falls from a Great Height - This is still a common death across Disney Live Action as well, Queen Narissa (Enchanted), Gaston (Beauty and the Beast), Injun Joe (Tom and Huck), and The Giantess (Into the Woods) all die this way. 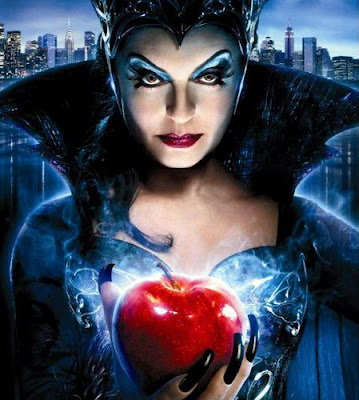 Ship Crash - Beckett (Pirates of the Caribbean: At World's End) is blasted by cannon fire on both sides and he dies in the debris. The movie doesn't shown exactly how he dies but it could be from drowning or impalement or hitting his head in the wreckage.

Shot - Out of all of these deaths, Barbossa's (Pirates of the Caribbean: Curse of the Black Pearl) was the one that moved me emotionally the most. Barbossa just became human again, just was able to finally taste an apple like he dreamed so long, but then Jack shot him. When his hand drops to the ground, the green apple he'd been saving to taste the moment he regained his mortality rolls out onto the heaps of gold that robbed him of his humanity in the first place. Not all treasure is silver and gold, mate.

Stabbed - Davy Jones (Pirates of the Caribbean: World's End) and Nizam (Prince of Persia: Sands of Time) are stabbed by blades. Davy Jones also had a moving death because he could have had such a different life hadn't he chose the path he did. 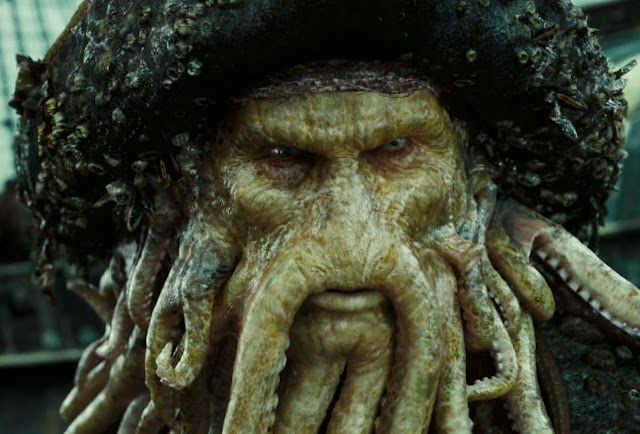 Sucked out of an Airlock - The Siphon (Race to Witch Mountain) met this fate. Pretty self explanatory. You get sucked out of an airlock and either you're going to freeze to death or fall to your death. 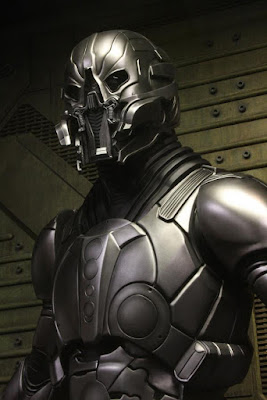 Trampled - Yet another ironic death. Reverend Drury (White Fang 2: Myth of the White Wolf) locked up the caribou in a valley to control the Inuit tribes. When the caribou were set free they stampeded and trampled him under their hooves. Not a good way to go. 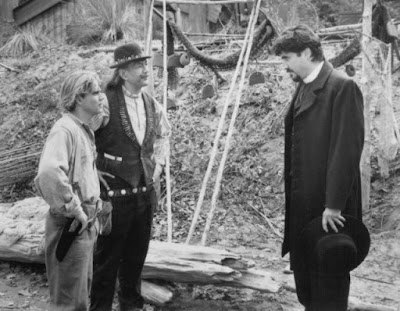 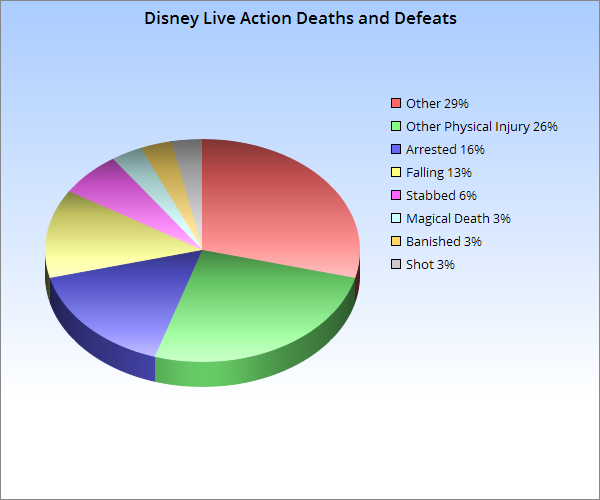 As you can see, in Disney Live Action they lean toward more physical deaths as opposed to others. 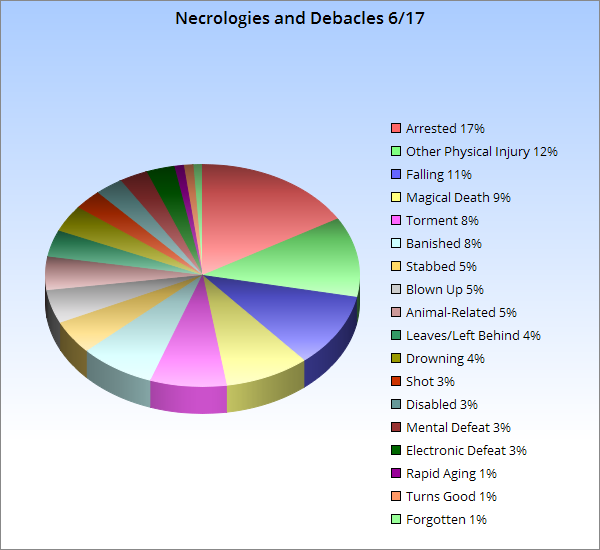 Now that I have more data, the stats are getting more interesting. I had to define them more to show the stats more clearly. But as of right now the top most common deaths and defeats across Disney, Pixar, Disney Animation, and MCU are Arrested, Other Physical Injuries, and Falling.

Conclusion - What do these stats mean to you? Do they change your perspective on the commonalities of villain defeats and deaths? I hope this inspired and informed you!