A Book Review of Blood for Blood by Ryan Graudin


For the resistance in 1950s Germany, the war may be over, but the fight has just begun.

Death camp survivor Yael, who has the power to skinshift, is on the run: The world has just seen her shoot and kill Hitler. But the truth of what happened is far more complicated, and its consequences are deadly. Yael and her unlikely comrades dive into enemy territory to try to turn the tide against the New Order, and there is no alternative but to see their mission through to the end, whatever the cost.

But in the midst of the chaos, Yael's past and future collide when she comes face-to-face with a ghost from her past, and a spark with a fellow rider begins to grow into something more. Dark secrets reveal dark truths, and one question hangs over them all--how far can you go for the ones you love?

I adored the first book, so I was so excited to read the conclusion of Yael, Luka, and Felix's story! Here we go!

The Plot: The story is very focused and driven. Because of the revelation about Hitler's doppelgangers, the resistance has to go about taking down the Reich in a very different way. Hitler is like a negative mockingjay and the only way to stop him is to discredit him. I love how much research Graudin put into this and how much of the plot is wrapped around historical facts. I really liked seeing a glimpse of Luka's household during wartime. It's interesting seeing World War II from the German's perspective. I was held from beginning to end with lots of feels along the way. A big twist sent me reeling and the ending was bittersweet, but for the most part satisfying.

The Characters: I love Yael so much as a main character. I just route for her wholeheartedly. She's so determined and true. I just love her. Felix I had some trouble liking in this book. I mean I understood what he was going through, but I still was like butttttt whyyyyyy must you do disssss?!!! I love Luka. I really relate to him in many ways. I get the need to please others and a frustration of always feeling like you have to be more than who you are. There are other characters I could comment on as well but those would stray into spoiler territory. XD

The Setting: This book doesn't take you to as many places as the first, but it was interesting spending time in war-torn Russia, Japan, and Germany.

Epic Things: Okay I'm just seriously happy Graudin included a lot of realistic things such as phantom limb syndrome. One of the characters becomes an amputee and he has this, which is very realistic from my research. Also, I'm really happy to see someone who's new with guns getting a bruise on their shoulder from the kick. This happened to me when I shot my first shotgun. If you don't brace properly it's going to get you. Also, the fact that the word "Sisyphean" is used in this book makes me very happy.

The Theme: My favorite part about these books is all the quotes, symbolism, and themes. I just love it.


"You and I are not monsters. If anything we're miracles."


Yael struggles with feeling like a monster because of what the German scientists did to her and she finally comes to turn that who she isn't bad. And I love seeing that journey.


"Ignorance was not quite bliss, but it was easy."


It's so easy to ignore problems instead of doing something about them, to ignore all of the signs and pretend they're all coincidences.

Content Cautions: There's a lot of Nazis so of course there's going to be a lot of violence. A lot of it, though speculative in circumstances, did happen in World War II. There's torture, broken fingers, a pile of human bones in a village, a brief glimpse of brain matter, dead bodies, gunshot wounds, and children being dissected. There is one kiss and a mention of rape. One character gives someone the bird.

How this can be applied to writing: Have you thought of a character having different names? Given to her by other people and to herself?

2.) A Symbol Having Different Meanings For Good or Evil - Wolves were Hitler's favorite animal for their ruthlessness and cunning, but to Yael they meant strength, unity, and they symbolized those she loved. The same thing but two totally different perspectives.


How this can be applied to writing: Does something one of your characters loves mean one thing to her but something else to another character?

3.) Car Trouble as a Great Obstacle - This was actually a really clever way to slow down characters. While the company is traveling the car breaks down so they have to stop and fix it which allows a tonnnn of things to happen to move the plot along.


How this can be applied to writing: Have you thought of your characters having car trouble as an obstacle?

Conclusion: Overall, this was a great book. I give it four stars because of a certain character death that I just can't get over. XD 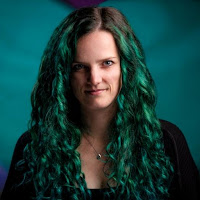 Ryan Graudin was born in Charleston, South Carolina, with a severe case of wanderlust. When she’s not traveling, she’s busy writing and spending time with her husband and wolf dog. She is the author of Invictus, the Wolf By Wolf duology, The Walled City, and the All That Glows Series.
Website//Facebook//Twitter//Goodreads//Instagram

My review of the first book of the duology!