A Book Review of Never to Live by Just B. Jordan


They said she was a monster. Now she has become one.

Imprisoned, Elwyn endures torture so horrific she drives herself insane to elude true madness. She finally escapes, but at the deadly cost of the only remaining friend she has. Now, unless her broken mind is playing another cruel trick, she discovers she is turning into the monster she despises most of all. Amidst fighters and fairies, demons and dragons, traitors wear the face of friend as she searches for the lost fragments of her mind.

Elwyn is the only one mad enough to face the Monster of the Kings, but she is more likely to destroy herself before even finding him.

Every year I had attended Realm Makers, I'd see this book sitting on a table for purchase and for a while I had to choose other books over it, but last year I finally purchased it. Honestly, what interested me a lot was the panther on the cover. I love panthers (Bagheera for the win!). However, after reading it I'm conflicted about how I feel about this book.


The Plot: The plot is mostly about internal journies which may be why I wasn't as into it. I like internal journies but I felt like the plot had trouble moving forward. The external plot focused on what ended up to be a wild goose chase and defeating the evil rulers of the country seemed more like an afterthought. There were some good twists, but I had trouble connecting to the characters so they didn't have as much of an impact on me as I feel like the twists should have. Because of the main characters tumultuous mental health I was unsure about what was real and fake many times so sometimes I doubted if character deaths were real or not or if events really happened or not, so I took everything with a grain of salt which may have also affected my emotional connection.

The Characters: I couldn't connect with any of the characters. I often got the characters confused and couldn't picture any of them very well except for Elwyn. I often had the characters motives misconstrued and couldn't understand what was going on. I liked Knite the shapeshifting panther/cat called a shifnir the most, but that was mostly because of his outward abilities, not his personality. I also liked Seylah because of her connection to the nature spirits, but I couldn't really connect to her that well either. The split personalities in Elwyn were interesting but also really confusing for me.

The Setting: I like the world building a lot. I really like the fairies, dryads, dragons, pegasi, multiple ruling kings, and the integration of Native American and Japanese cultures. But I also got a lot of the world terminology confused. I never did figure out what "loxasta" was.

Epic Things: At one point Cestmir receives a really neat water weapon from a mermaid but I don't remember him actually using it. There's also dimensional travel at one point but it felt like it came out of nowhere (no pun intended).

The Theme: I read the afterthought at the end of the book and it talked about how Elwyn's struggle symbolizes trying to fix our own problems but realizing we can't fix them without help from God. Some lines that personally impacted me were:


"People near me died," [Elwyn] said. "That's what they said, and it's what happened.""Everyone dies," the boy said. "Everyone near everyone eventually dies. It's just the time and place that we don't know. Simply being around you won't kill anyone, trust me."

I feel like it a lot of media characters distance themselves from others because they fear other characters will get hurt being around them. This assesses that.


"You don't need to feel better about your past. You need to see it as what it was and leave it how it belongs: as your past. Decide to apply it, rather than let it use you. Because a strong heart--not a hardened heart."

I like this a lot because sometimes it's easy to let tough experiences harden you.

Content Cautions: There's a good deal of violence including a dead infant and a character loses two fingers. There are several mentions of suicide and attempts at suicide.

What We Can Take Away For Our Writing:
*SPOILERS*

1.) A Villain Turning Good - I had the impression that Bledrin was supposed to be a villain considering he was demon possessed at the beginning of the book and fraternized with the bad guys, but then he sorta hung around the good guys and I got confused about what his goal was. Then eventually because he's a darkblood as well Elwyn makes it her mission to save him and she does.

How this can be applied to writing: I'm not a huge fan of bad guys turning good because it can almost seem like it's excusing their wrongdoings. I get that it's a redemptive mission. I just think it should be used sparingly in writing.

Conclusion: I hate bashing on this book too much because I've met the author in person and I don't like tearing apart another author's work. Perhaps a second read would help me enjoy the novel more, but at this time three stars are all I can give it. 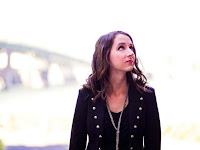 Just B. Jordan was born and raised in Oregon and lives in the foothills of a small town near Eugene. Homeschooled along with her three siblings, she graduated high school a year early and received her first publishing contract at the age of 18. Never To Live is her first novel. It was nominated for the Clive Staples Award.
Website//Facebook//Twitter//Goodreads//Instagram