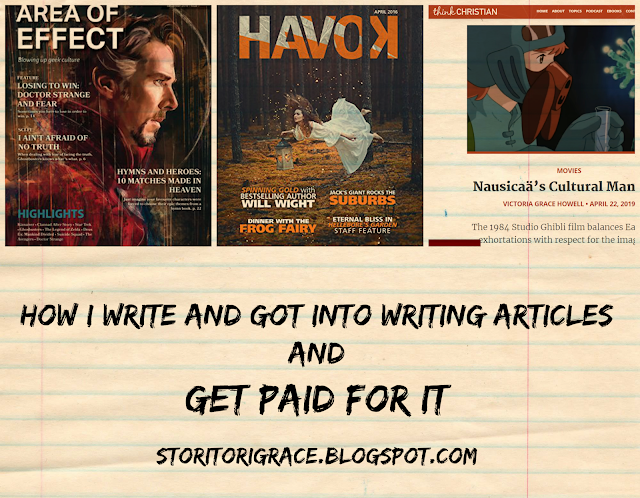 If you've followed me for a while then you probably know I've written articles for a few magazines and webzines. I mention it on my social media and my monthly wandering posts. I'm not an expert article writer ... person since I don't make a living off of it but I do get a few hundred bucks a year for doing it. If I had more time I could probably get into it more and maybe I will in the future but for now it's a nice little profit. For an aspiring writer every penny counts and I'll be honest, it's really validating to get paid for your writing. It's like "Yay! Hours of working my butt off are actually paying off." XD


I've written for Splickety Magazine (Now Havok), Area of Effect (Now Mythos and Ink), and I'm currently a monthly contributor for Think Christian. I got my first piece published in a magazine in 2016 and I've been writing essays and short stories since. Though essays are my specialty. Since becoming a monthly contributor at Area of Effect in summer 2016 I've probably brought in over 1,500 bucks.


How it started - The first time I heard about writing articles was at the Florida Christian Writers Conference some close to ten years ago (Gah, I'm getting old) during a keynote speech by Eve Marie Everson who mentioned how she wrote a lot of articles to get her name out there and she highly recommended other writers do it. As a teenager hearing that honestly stressed me out because all I wanted to do was write novels not waste my time doing articles too!


Fast forward about four years and I learned more about branding and marketing and how writing articles and being published in something before you get a novel published can actually help you get a novel published. Maybe that's what Everson was saying back then but it didn't sink in for a few years. So then I tried submitting to Splickety Magazine and I got rejected ... twice, so I moved on to different areas.


Starting Out with Volunteering - I saw my friend Casey (at that time to me she was just some girl I knew that cosplayed really well) was part of this group called Geeks Under Grace which is a website that publishes news and reviews and fun stuff. It was volunteer but I could gain experience. So after a harrowing adventure that involved me becoming a writer at first, my internet being out for three weeks, and then me becoming an editor, I was in. I learned a lot about writing reviews, editing, and writing for the internet in general.


My first publication - A couple of years later I was really enjoying working with GUG (still do), but I wanted to try getting paying gigs. I researched how to write articles and I found out you need to research the magazine or webzine first. I was determined to get into Splickety so I bought a bunch of their magazines and started reading and gauging their style. I also made sure to read their guidelines and discovered that shorter pieces have a bigger chance of being published. This magazine had a theme for each issue so I wrote a 750-word flash fiction (IT COUNTS AS AN ARTICLE!) based on the Six Swans fairytale and ... I got my first yes! I got a whopping $10 which I spent mostly on additional copies but I had my first publication under my wing. 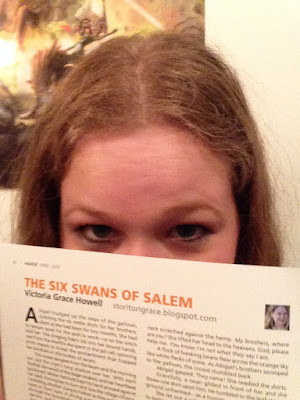 Getting my first regular gig - So I wanted to get into even more magazines, so I went back to dear old Casey (whom I've now become friends with) and asked what other webzines I should try for. She suggested a couple. A few rejected me (as in they sent me a brief notice that they were interested or never replied), but one did write back, one reason because I mentioned Casey. She then asked for pitches (these are very brief explanations of your idea for an article) and she accepted my pitch for a Hunger Games piece.

I wrote it and sent it to her and she loved it. She said it changed her whole perspective on Katniss Everdeen. She went from disliking her to appreciating her. After writing a second piece for her she asked me on for a staff writer and I got paid $50 Canadian which comes to $36 American per piece. I wrote for them until October 2018 when they had to temporarily close because of some crazy Canadian government volunteer status thing, which honestly brought me to tears. I was literally being paid to stay up to date with current geek culture and write essays about why I love it.

Getting my current regular gig - After that tragedy happened Allison recommended me to Think Christian in November 2018. And then the editor emailed me and asked if I wanted to write for them so I asked him if I could write a piece on Final Fantasy XV so I played the game, pitched my idea, he liked it, I wrote it, he edited it, I rewrote it, and it got published! And then I’ve been writing monthly for them since.

Summary - So that was a long spiel (that was hopefully not boring) about how I got into this, but the point is if you want to get into writing articles: 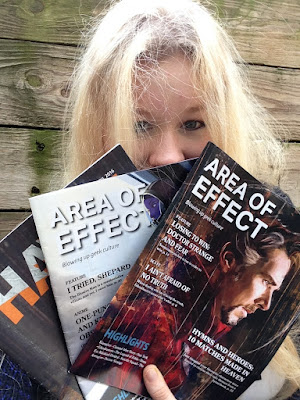 What I Do Now - So how it works now is I keep up to date with pop culture. That’s part of the reason why I watch so many movies and shows and play so many video games. If something I know I’d Like to write about is coming up, I reserve it then play it or watch it then I’ll pitch my idea to my editor. When you pitch you just want to give the gist of the article so you want to keep it to one or two sentences and then he’ll let me know if he wants the piece or not and give me a deadline which is as much as a much as month out or as less as three days dependent on the piece. So I’ll type up the piece which is usually anywhere from 500-1000 words and send it to him and then he’ll read it and send feedback to me. I’ll edit according to the feedback then pass it back to him then it will go up shortly afterward usually two weeks out tops. Then at the end of the month, I send him an invoice and I get a check in a week or so. This isn’t how all webzine work but this is how the ones I’ve had experience with do. With Area if Effect they paid me via PayPal and with Havok you have to write the entire flash fiction and then submit it.

Conclusion - Getting paid to write essays, short stories, and poetry is more than possible. This is just how I did it but I know people who’ve pitched at conferences and got their pieces into even bigger magazines or used the Freedom with Writing email list to find gigs or just picked a site they wanted to write for and worked hard to get in. Having this publishing credit helps you get a novel published, working an editor is a valuable experience, and the validation that your writing is good enough to be paid for is really nice too.