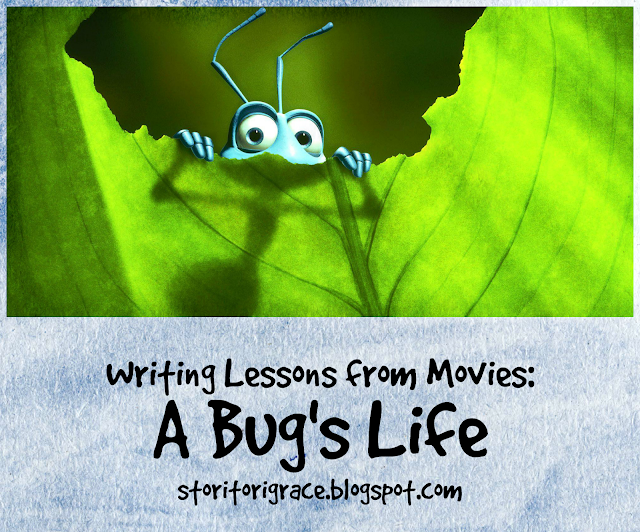 A Bug's Life takes place in summer, so what better time to talk about this Pixar classic? This is the first Pixar movie I saw in the theaters, so it has so many memories attached to it. To this day it's one of my favorite Pixar movies of all time.

If for some reason you haven't seen this movie, it's about a colony of ants oppressed by a gang of grasshoppers. Every year the ants gather food for the grasshoppers to "earn their protection." After an ant named Flick accidentally destroys all of the food, he leaves to find bigger bugs to rid the colony of the grasshoppers.

Warning: Some spoilers in points 4 and 5.

1.) Technology For a Tiny World - In this tiny world, the bugs have used organic or manmade materials to create their own technology. In the country, Flick has constructed a harvesting machine with a burr, rocks, twigs, leaves, and grass and glowing mushrooms are used for lights in the anthill. In the city, an animal cracker box was repurposed for a circus carriage, old Christmas lights for traffic lights powered by fireflies, and a Chinese coin is used for a gong.

How this can be applied to writing: A smaller world comes with its own challenges for technology. They can't use wires and circuit boards because they're too small and many things they don't have the means to make so they have to recycle man-made materials. This creates an interesting world that's half foraged from humans and then half from what nature has to offer.

If you create a big world or if you create a small world, both have their challenges for how these beings live in these worlds. Arrietty's family in The Secret World of Arietty borrow most of the materials for their daily life since industry isn't possible for their nearly extinct population. For creatures such as giants, they need more material to create what they need and sustain themselves such as in the BFG.

2.) Oxymoron Characters - Frances is a male ladybug, which is an oxymoron right there. From the beginning of the movie, he struggles to convey his gender, but this struggle defines Frances as a character since most characters who are ladybugs just are females, such as Mrs. Ladybug in James and the Giant Peach.

How this can be applied to writing: Putting two oxymoronic traits together can make the most interesting and iconic characters, such as the giant dwarf Eitri in Avengers: Infinity War or Satan-hating half demon Rin from Blue Exorcist.

3.) A Children's Movie Villain That's A Serious Threat Without Being Too Scary - Hopper is definitely one of Pixar's most iconic villains next to Sid from Toy Story and Syndrome from The Incredibles. As a kid, I was impressed that Pixar gave my audience at the time a villain who was an actual threat since I was getting tired of watered down villains on Saturday Morning cartoons. Hopper was intimidating and wasn't afraid to make good on his threats. When he first comes on screen and smashes into the anthill and intimidates Adda, he established himself as a difficult foe. If you didn't get that point before you definitely do by the cantina scene when he gives his iconic monologue and buries two of his minions alive in grain. I always just thought this was good writing and Hopper never scared me. Thumper maybe a little bit ...

How this can be applied to writing: Creating a villain for younger audiences is a fine line. You don't want them too scary or you create lifelong fear of the film (I'll never forgive you creators of Watership Down, The Dark Crystal, and The Secret of NIMH.) or a villain that is wishy-washy and just poor writing. Villains such as Hopper, Ozai, and Syndrome meet that criteria. They're genuine threats, but they don't spew blood from their mouths as they rabidly attack other rabbits, turn podlings into desiccated meat sacks, or stab someone in the chest with a dagger! How did those get a G and PG ratings?! ... I digress.

4.) Dangers of a Small World - Some of the biggest threats for our tiny insect heroes are cracks in dried mud, rain, and birds. For humans, we don't really care. The rain waters plants, birds are pretty, and we just step on mud cracks. but for bugs, they're series threats. Dried mud created great canyons for the bugs to fall into, raindrops fall like bombs that can hurt bugs, and birds well they eat bugs.

How this can be applied to writing: If you create a small world think of all of the dangers your tiny characters can encounter. Birds and cats are typical examples. But things like rain and mud cracks can take much more effort to think about.

5.) Coincidences are Bad Writing ... Unless They're Bad for Your Characters - The film starts with a coincidence as Flick happens to put his invention on the altar that then destroys all of the food and near the climax, the bird happens to hit the circus caravan that releases PT who then sets the bird on fire. Both of these worked for the story. Because they were bad things.

Conclusion - If you're writing a tiny world, A Bug's Life is essential research!