A Book Review of Angel Eyes by Shannon Dittemore

Brielle's a ballerina who went to the city to chase her dreams and found tragedy instead. She's come home to shabby little Stratus, Oregon, to live with her grief and her guilt . . . and the incredible, numbing cold she can't seem to shake.
Jake's the new guy at school. The boy next door with burning hands and an unbelievable gift that targets him for corruption.
Something more than fate has brought them together. An evil bigger than both of them lurks in the shadows nearby, hiding in plain sight. Two angels stand guard, unsure what's going to happen. And a beauty brighter than either Brielle or Jake has ever seen is calling them to join the battle in a realm where all human choices start.
A realm that only angels and demons-and Brielle-can perceive.

Since Shannon Dittemore started writing for Go Teen Writers, I've wanted to read some of her books. After winning an ebook of hers, I've finally got the chance!


The Plot: Going into this book I didn't know what to expect, but it turned out to be better than I thought. The best way I can describe this is angels meets crime. The book weaves together the supernatural with a crime show twist of murder and sex trafficking. Supernatural powers are involved as well and I adore people with powers. There were several good twists that threw me for a loop and several scenes really gripped me.

The Characters: I was unsure about Brielle at first, but she grew on me. I like that she's a dancer and she sought to realize her dreams. She's dealing with a lot of hurt and it's neat to watch her journey. Jake is sweet. I like how he's gone through a lot, but it makes him stronger. I also liked his wisdom beyond his years. The book also goes into the POV of an angel and demon. This is a neat contrast to watch, though I enjoyed Brielle's point of view the most.

The side characters such as Kaylee and Brielle's dad were pretty interesting, but the focus was mainly on Brielle, Jake, Canaan and Damien and not so much on everyone else.

The Setting: The story is set in Oregon, a place I haven't been to, but I was transported to Brielle's little town by all of the description. I liked the snowy and cold environment as a backdrop for the happenings.

The Writing: I liked the writing for the most part. There are a lot of pretty visuals and I like the mystery surrounding what happened exactly to Brielle and why was she so traumatized. The only things that irked me was some action and reaction errors, some telling, and the henchmen seemed a bit bungling.

Epic Things: Supernatural powers were definitely high on the cool factor as well as epic battles in flight. I like how in the Celestial realm you can see things like fear and stains of violence. It was really cool to picture. The reference to Elisha from the Bible was very neat as well. I also really enjoyed the Gollum reference with the halo.

The Theme: This book tackles a lot of tough questions, especially relating to faith and why God allows bad things to happen. Many of the questions Brielle asks are ones that I've contemplated myself. Some of my favorite passages relating to this were:

God doesn’t call us to blind faith, Brielle. Don’t let anyone tell you that. He just asks us to believe Him, to believe that what He said about Himself is true. Even when it doesn’t make sense. Even when it’s hard. I would give anything to understand God and why He does what He does.” Jake pulls my face closer to his. “But we’re His creation, Brielle. Not the other way around. We can’t make God into what we think He should be. With everything you’ve now seen, is it so hard to believe that perhaps the tragedy of your mother’s death—of Ali’s murder—that maybe these things were. ~ Jake from Angel Eyes by Shannon Dittemore

“I know. But it starts with trusting that you don’t know everything. That God does. That His decisions are better than yours, even when they hurt. You do that for a while, and you realize that regardless of what He allows, God’s our best hope. Our only hope.”~ Jake from Angel Eyes by Shannon Dittemore


The message didn't feel pushed and these lines stuck with me. I liked knowing there's a book out there addressing them. Trusting God is hard, something I struggle with. Knowing that your life belongs to a Creator and it's all about that Creator is a tough pill to swallow as well. We are His creations, everything we do in the end should reflect back to Him.

Content Cautions: Some people art shot point blank and cut with a knife. There are some various bloody cuts. Brielle's dad drinks beer at one point. There are also sexual references with the sex trafficking scene.

1.) Conveying A Message Without Being Preachy - I talked about in the Peril review a while back about how messages can be pushed and that works for ill for a story. Today I'm going to highlight how in this story there's a message that's obvious, but it isn't shoved down your throat. Like I mentioned this book tackles a lot of hard theology, a lot of questions Christians get tripped up on. It talks a lot about faith. What I like the most about it is that the story showed faith being played out instead of just talking about it. It also wove seamlessly into the story instead of feeling tossed in or like it's overshadowing the plot.

How this can be applied to writing: It is possible to have a strong message in your story without it feeling preachy to your readers. The message should be harmonious with the plot and never before the plot. It should be tangible in the characters' actions and even displayed in different ways such as someone succeeding in faith and someone failing in it. Different angles are a great way to see all points of a virtue or message.

2.) Being Creative with the Spiritual World Without Stepping on Theology - Stories that involve the real Biblical spiritual world can be a little iffy. Messing with things like angels and demons can often stray into territory that misrepresents Christian theology. Supernatural, though an intriguing show, does this galore (Where in the world is Jesus? Sam and Dean need Jesus.). Is there a way to write highly spiritual stories without doing that? I believe stories like the Screwtape Letters by C.S. Lewis, The Judgment Stone by Robert Liparulo, and this book certainly do.

As long as the actions of the spiritual characters align with those in the Bible, creative license can be taken with these. The Bible doesn't give exact details on many things about the spiritual worlds and that's where authors and artists come in to fill the gap. God still can be praised and the theology is sound.

How this can be applied to writing: When writing a book that directly involves the worlds of Heaven and Hell do your research and do it directly from the source: The Bible. Pray about where God wants to lead you with these stories. Powerful stories can be made with ones like these.

Conclusion: Angel Eyes is an intriguing book with a deep message, a compelling plot and a satisfying ending. Four stars! 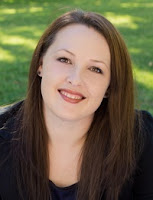 Shannon Dittemore has an overactive imagination and a passion for truth. Her lifelong journey to combine the two is responsible for a stint at Portland Bible College, performances with local theater companies, and a focus on youth and young adult ministry. The daughter of one preacher and the wife of another, she spends her days imagining things unseen and chasing her two children around their home in Northern California. Angel Eyes is her first novel. Find her on her website, Twitter, Facebook, and Goodreads!

Do you want a chance to read this book? You can win an ebook copy of your choice over at the giveaway!