I was wondering what I should theme this post for and since the new for this week is North African Mint, I though the Lion King extremely appropriate.

1. being reborn; springing again into being or vigor: a renascent interest in Henry James.

Example Sentence: Rakiki's word had a renascent effect on Simba.

The Song:
"King of Pride Rock"
from the Lion King score
by Hans Zimmer

Disney movies are well known for their lyrical pieces, but many of their film scores are amazing! I didn't know the Lion King soundtrack was composed by Hans Zimmer until writing this post! This is a very roller of emotions sort of piece. You have the devastation and disappointment of what has become of Pride Rock at the beginning, the intensity of battle in the middle, and triumph at the end all performed with an orchestra and choir. African flutes, drums, xylophones, and vocals find their way in especially at the end. This is a good piece for any novel with an African tone be it fantasy or historical. 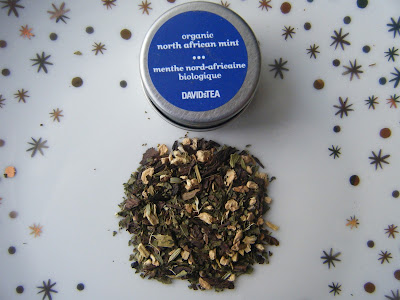 Explore Northern Africa, from its souks to its deserts, with this intense combination of spices and mint. It combines organic green tea and peppermint with organic cardamom, ginger, licorice root, fennel clove and black pepper. Deliciously sweet, with all the romance of the Maghreb. (MK Kosher)

The Tea: So far my DavidsTea tastings haven't been the best, but North African Mint changed that. The tea has a dominant mint flavor with fennel flavor along with it, thought it's not as a strong as Fabulous Fennel to my relief. The tea finishes with black pepper spiciness and a hint of ginger and cardamom. This is definitely a unique combination. The spice is quite significant, but sugar cuts that down. I could see this as a good tea for stomach aches.

This tea reminds me of African Mountains or rainforests like where Pumba and Timone live in the Lion King. It has a freshness that good make a good iced tea and reminds me of waterfall air.

Serving Recommendations: I steeped this tea at 185 F for four minutes and added sugar.

How much is it and where can you get it? You can buy this tea at a DAVIDsTEA store or on their website. You can get just North African Mint for $9,98-$99.80, depending on how much you get. The smallest amount is 2 oz. and the largest amount is 20 oz. You can also get Fabulous Fennel along with five other teas in the Super Spice set (which is what I did) for only $14.00.

So how good is it? The tea is very good, but still is a bit too exotic in ways to merit five stars, but I still enjoy it. Four stars!