A Book Review of A Time to Die by Nadine Brandes

How would you live if you knew the day you'd die?

Parvin Blackwater believes she has wasted her life. At only seventeen, she has one year left according to the Clock by her bedside. In a last-ditch effort to make a difference, she tries to rescue Radicals from the government's crooked justice system.

But when the authorities find out about her illegal activity, they cast her through the Wall -- her people's death sentence. What she finds on the other side about the world, about eternity, and about herself changes Parvin forever and might just save her people. But her clock is running out.
Series: Out of Time (Book 1)
Genre: YA Dystopian
Publisher: ENCLAVE PUBLISHING (October 1, 2014)
Page Count: 400 pages


A year ago I met Nadine in my Camp NaNo cabin then months later I met her in person at Realm Makers. Since I met her, I just had to purchase one of her books and I did. She was sweet enough to sign it for me. I love YA dystopian, so this immediately intrigued me, but this book definitely didn't go in the way I expected.

The Plot: The plot is very focused on self discovery. There's plenty of action sure like a wolf pack attack and gun fights and zealous Albinos, but it's not kick butt and taking names action. It's a story of survival, faith, endurance, perseverance, and finding your purpose in this world. I love the depths that it goes into. A world where you know when you're going to die is really interesting. It definitely makes you think. You also feel a constant tension knowing that Parvin's life is gradually ticking away. Seeing how much time she has left with each chapter definitely adds to that.

The Characters: Parvin is a really interesting main character. She's very well-rounded with hobbies, loves, faults, and virtues. You care about her very quickly. You sympathize that she's going to die at such a young age. She's also a triplet which is very neat, since I don't see those mentioned much in stories. It's also cool that her birthday is in April like mine. ^ ^ I also relate to her wanting to be an activist and help people, but also being afraid. She also wants to learn how to write which is also pretty cool to have in a dystopian novel. Basically, she's very real.

The book has a vast variety of side characters. Each were memorable. I can picture them all in my mind and remember them easily. Side characters can often get lost, but I love how Nadine made sure there was a defining feature for each of them.

Reid is the kind, sweet brother, who loves to travel, but he also has some interesting secrets. *waggles eyebrows* Hawke and Jude are also interesting characters as well as Willow and Skelley Chase. Oh Skelley ... I have a lot of bones to pick with him. He's just ... *shakes head*

The Setting: The setting is very cool and so very developed. It feels like a real place. The book travels to many locations and has this interesting mix of superior technology and in some cases where technology has gone backwards sort of like the Hunger Games. For example, paper is very expensive so most people use wax pages. There's also the tensions between the West and East sides of the US because of their opinions with the clocks. It's also interesting how they structure their society around the clocks even to the point they have mentors who help them fulfill their wishes.

The world beyond the wall is very fun too. I won't give away too much info, but albinos are very well developed and a bit disturbing. I like how the author is pointing out an extreme version of environmentalists.

Epic Things: The books with emotigraphs are so cool. They're these things that literally capture your emotion in the moment you're experiencing something. I'd really like to try that. XD I also like that this is basically an extreme writing story. Parvin is living a story for entertainment. It's very intriguing.

The Theme: There are so many themes in this book. Parvin goes through trials much like Christian does in Pilgrim's Progress. She learns how to trust in God no matter what. She learns how to see truth among lies. Her arch is just so powerful. You just have to read the book yourself to understand it.

Content Cautions: There isn't any swearing or sexual content. Some nudity is mentioned, but not in detail. The only concern I can see is violence. Several people have limbs cut off by the albinos. Wolves attack Parvin and seriously injure. Other people are injured in various ways. The wounds are described in detail, but not too much to be disturbing.

1.) The Details Worked - One thing I love about this book is the incredible amount of detail the author went into. She described things so closely. Like the acne on Parvin when she didn't shower or the ghost limb syndrome this certain character gets or eating green cattails with butter and salt or serious concussion symptoms. She did so much research it blew me away. The detail is raw and pulls you in. I felt like I was inside Parvin more than I have in a story in a while.

How this can be applied to writing: The little things is what will bring your readers close. The small sounds, smells, and touch you can find only when you're in person with something. Those tiny things draw your reader into your world. Do your research when dealing with foreign environments. Find those tiny details.

2.) The Constant Underlying Tension Worked - Constantly knowing that time is running out for Parvin made me always wary. I kept thinking, "Hurry up! You're wasting time! Come on, Parvin!" Also the fact that you're unsure whether the clock is hers or Reid's increases the tension. You're on a pendulum of who's it is. Sometimes it seems like it's Reid's. Sometimes it seems like it's hers. I had this feeling of uncertainty that kept me turning pages whether I was in the middle of a tense action scene or not.

How this can be applied to writing: Action can't be your only reason why you're reader is going to keep turning the pages of your story. Mystery is what's going to make them keep going. Tension is going to keep them going. Keep questions in their mind. Answer small ones and what the reveal big ones. Think about what tensions you can add to your story. Can you add one or more that carries your reader throughout the story?

3.) An Honest Relationship with God Worked - I love how brutally honest Parvin is about her faith. At the beginning of the book, Parvin believes in God and has a relationship with him, but she doesn't have a closeness with him yet. But as the story goes it grows. She doubts. She's afraid. She screams, "Why?" to him. Yet she also experiences the profound peace that the Lord can give us. It's such a picture of the Christian faith. It's inspiring that through trials we can grow in our relationship with Him.

How this can be applied to writing: If your characters are Christians tell it like it is. Put all the dynamics of the Christian faith in it. The good, bad, and the ugly. God wants us to be honest with him. He wants us to love Him. He wants to love us. Rawness and honesty draw in readers, even with being this honest in things that can be frowned upon. God wants all of you and showing a faith grow and mature is amazing and inspiring to see.

Conclusion: A Time to Die is an extremely well-written book with much to take away from as a writer and as human being. The book enthralled me and the end wowed me. This is a beautiful book and one of the best I've read in a long time. 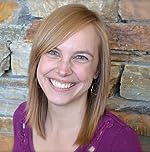 Nadine learned to write her alphabet with a fountain pen. In Kindergarten. Cool, huh? Maybe that's what started her love for writing. She started journaling at age nine and thus began her habit of communicating via pen and paper more than spoken words. She never decided to become a writer. Her brain simply classified it as a necessity to life.

Nadine is a stay-at-home author and writes stories about authentic faith, bold living, and worlds soaked in imagination. She lives in Idaho with her husband and works as a freelance editor. When she's not writing, editing, or taste-testing a new chai, she is out pursuing adventures.Find Nadine at her blog, Facebook, Twitter, Goodreads, and Instagram.