Villain Necrologies and Debacles: The Lord of the Rings & The Hobbit Edition 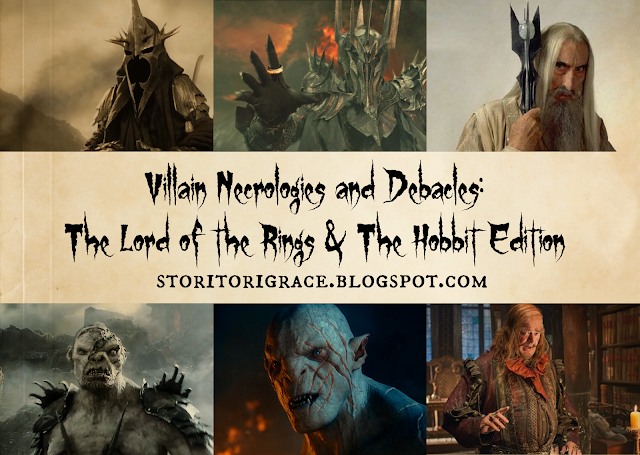 Villains meet their demises in so many different ways. For some this means death, for others, this means an unfortunate incapacitating situation. Writers put a lot of thought into how their antagonist finally fails, but which way is best for your villain? That all depends on so many different circumstances, including audience and genre. This is what inspired my series "Villain Necrologies & Debacles." Over time, I'll be analyzing different animation studios, franchises, and more. These posts are meant to show you what sort of defeats have been done whether common or uncommon, perhaps inspire some villain defeats of your own, or you can just enjoy the morbid humor. Check out last month's Studio Ghibli Edition!

September is Tolkien month so I thought it perfect to do a Necrology and Debacles posts about Tolkien villains! Tolkien's villains have a lot of well-deserved and creative deaths combined with Peter Jackson's director's vision. There is no "Villains that Lived" section because all of these died and I don't know about you, but I was happy these meanies met their bitter ends. I'm expanding past the obvious villains to some smaller ones because The Lord of the Rings and The Hobbit have so many points of views that many of these charaters have their own personal villains like The Master of Laketown was to Bard the Bowman and Gorbag was to Samwise Gamgee.


Crushed by Smaug - The Master of Laketown from The Hobbit was such a gross lovely chap. He did everything he could to foil Bard the Bowman for his own selfish gain, even if that meant the citizens of Laketown paid the price. While fleeing Laketown with the town's treasury, Smaug the Terrible falls from the sky and right on top of him.

Beheaded - I had to look up a lot of these orc and Uruk-hai names so don't feel bad if you don't know them because I'm a huge Tolkienite fan and I didn't know them. Lurtz was the horrible *avoids swearing in rage* who killed Boromir. Now you remember him? Okay, we're on the same page now. After murdering that sacrifical son of Gondor, Aragorn attacks him. Aragorn stabs Lurtz in the stomach and chops his arm off, but what finally does him in is his head rolling on the ground. Serves him right. 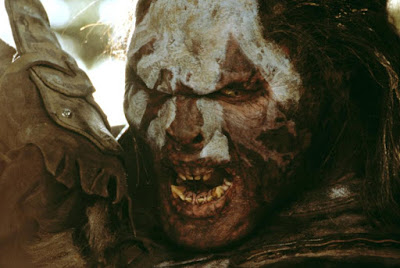 Life Force Melted in Lava -  If you haven't even watched or read Lord of the Rings, you know about this death. Sauron put his life essence inside a simple golden ring and the only way for it to be destroyed is in the fires of Mount Doom. Gollum falls into Mount Doom taking the Ring with him and both of them burn in molten lava, thus destroying Sauron's last ties to the world. 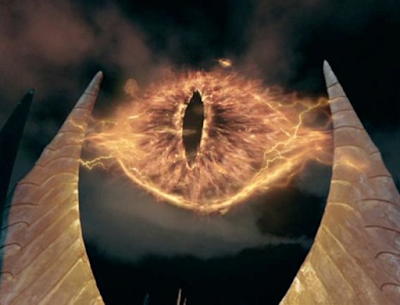 Shot by an Arrow - In the Return of the King, Gandalf and several other characters travel to Isengard to speak to Saruman the White and Grima Wormtongue. After Saruman hits Grima across the face and calls him a cur, Grima takes his vengeance by stabbing Saruman in the back several times. Legolas tries to stop him from killing Saruman (because they need him for information) by shooting and killing Grima. 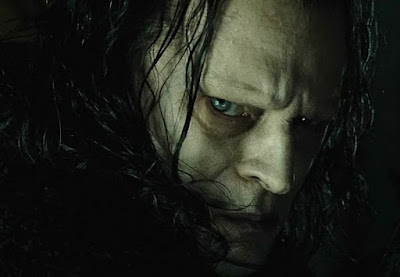 Slashed Across the Back - Gothmog is the purdiest orc you ever done see. (If you didn't read the sarcasm in that, try again. And I've affectionately nicknamed him Gimpy because he has a limp and a bad arm.) He's the Lieutenant of Minas Morgul and leads Sauron's orc armies at the Battle of Pelanor Field. He also rides on a warg and likes to call his subordinates things like "scum" and "maggots." At one point in the battle he attacks Eowyn then she hamstrings him. Later on while Eowyn is injured, he comes after her in vengeance. Aragorn and Gimli come to the rescue. Aragorn cuts off Gothmog's arm, Gimli chops him with an ax, then Aragorn delivers the last blow across the back with Anduril.

Slashed Across the Stomach Then Fell From a Great Height - The second runner up in the orc ugliness pageant is the Goblin King. When Gandalf and the dwarves are escaping from Goblin Town, the Goblin King intercepts them on a bridge. Gandalf slashes his goiter then his stomach then for extra measure the Goblin King falls off the bridge.

Stabbed in the Back - Gorbag is the orc with many piercings who takes Frodo to the Tower after he's stung and wrapped up by Shelob. Later on he threatens Frodo by saying he'll knife him like a stuck pig, but Sam saves the day with the infamous line, "Not if I stick you first," as he stabs Gorbag in the back with Sting. 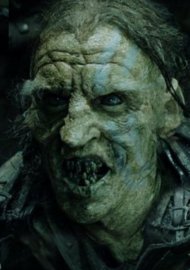 Stabbed in the Back Then Impaled Upon a Spike - After Saruman is stabbed by Grima (as stated in Grima's bit) he falls from the Isengard tower and onto a waterwheel spike. Ouch. If he wasn't dead before he was then. 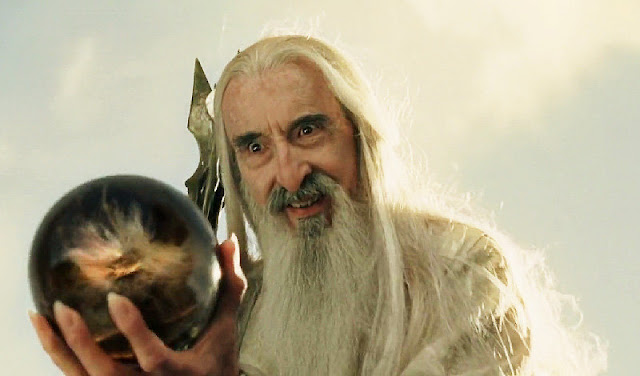 Stabbed in the Face - The Witch King of Angmar battles with Eowyn and after he breaks her arm with his mace (owwwwwwwwwwwwwwwwww. I always cringe at that part because it would hurt so much.), Merry stabs the Witch King in back of his leg, forcing him to his knees. Then Eowyn manages to get to her feet and utters the infamous line, "I am no man!" and stabs him in the face with her sword.

Stabbed in the Head Then Crushed by a Rock - After a long battle between Bolg (aka KILI MURDERER) and Legolas, the woodland elf finally manages to jab his daggers into the big orc's skull then Bolg falls and is crushed by part of the tower they were fighting on. 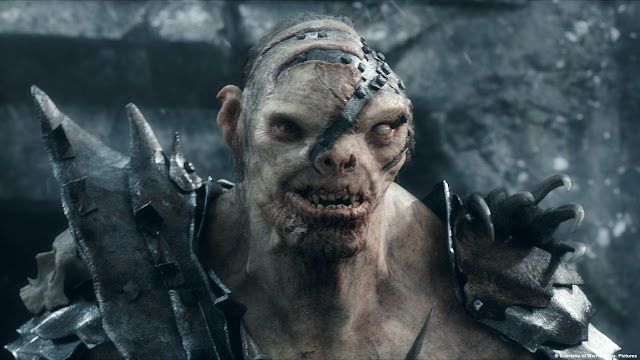 Stabbed Through the Chest - The handsomest orc award goes to Azog the Defiler! I mean it's Manu Bennett playing him. How could you make him ugly? ... Moving on. During a very gritty fight between him and Thorin, they stab each other through the chest.

Stepped on - Grishnakh is the third runner up to the ugliest orc award. This is the guy who said, "What about their legs? They don't need those!" He chased Merry and Pippin into Fangorn Forest even after getting a spear to the back. Right before he could make a maggot hole in Merry's belly, Treebeard steps on Grishnakh. Squish!

Suffocated Then Probably Broken Neck - And lastly we have Mr. Unibrow aka Alfrid, the sycophant to the Master of Laketown. You actually don't see his death in the theatrical edition, which I think is odd, but in the extended edition while Gandalf is battling a troll, Alfrid ends up inside a catapult. One of the coins smuggled in his corset falls off onto the trigger plate and he's launched into the trolls mouth. Gandalf fells the troll and I'm assuming Alfrid broke his neck during the fall. 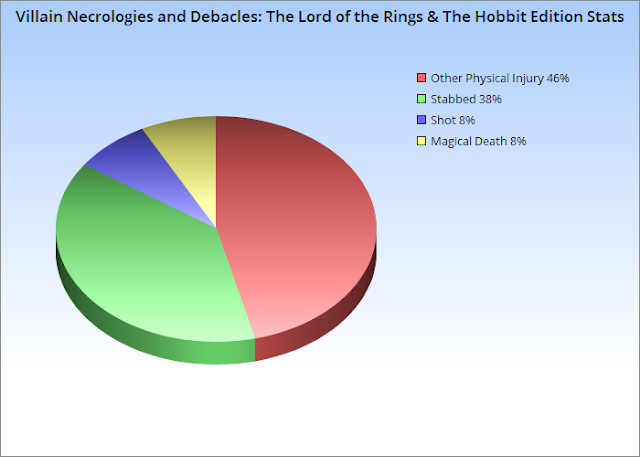 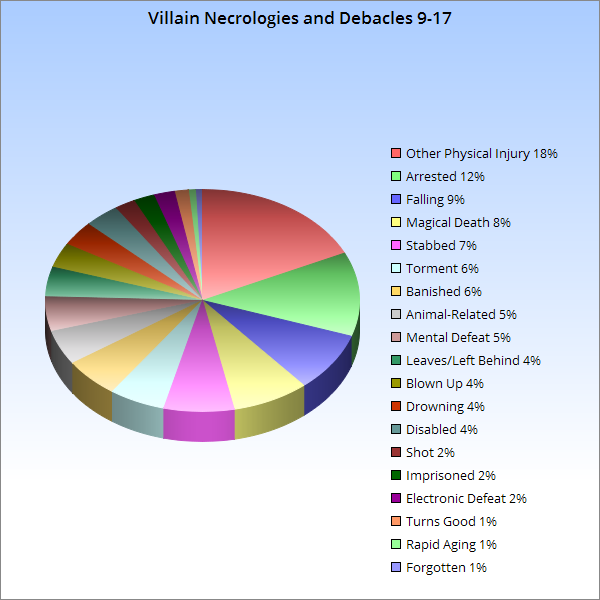 Conclusion - The Tolkien Universe's stats definitely bumps up the more violent deaths in the stats. There weren't any villains that didn't die, which is a first in the Necrologies and Debacles series. This is on the opposite side of the scale from last month's more pacifist approach to villain defeats.